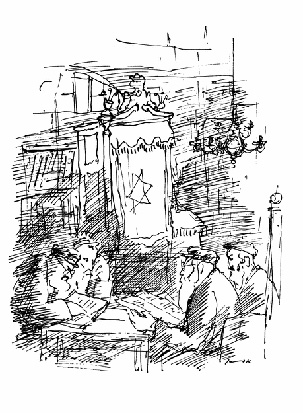 Miller, Leo. 1983. Sokolievka/Justingrad : a century of struggle and suffering in a Ukrainian shtetl, as recounted by survivors to its scattered descendants. New York: Loewenthal Press.

Justingrad was founded as the result of the expulsion of Jews from the crown village of Sokolievka in 1825 by decree of Czar Nicholas I. The Jews of Sokolievka moved approximately 1km to the north across a large pond where they established the shtetl of Justingad. The shtetl and the village were connected by a bridge over a dam. Justingrad is called a “shtetl” or “little city” because it had a vibrant marketplace and and manufacturing sector, serving the surrounding hamlets. During increased industrialization and urbanization in the late 1800’s and early 1900’s, there were strong waves of emigration to larger cities and to the United States because of better economic opportunities available beyond rural Ukraine. Pogroms and attacks during the Russian Civil War caused a further precipitous wave of emigration, and the remaining Jews of the shtetl were killed by a Nazi Einsatzgruppe (mobile killing unit) on July 27, 1941.

This Yizkor book is both typical in some respects and unique in others. Like others, it chronicles the life of the shtetl in great detail, covering social relations, religion, and culture. It contains personal narratives, photos, artwork, and lists of the deceased. It also relates the destruction of the shtetl, and the emigration of the remaining survivors. Chapters discuss festivals, synagogues, schools, occupations, the library and post office, as well as charitable organizations. The theme of cultural and economic assimilation weaves throughout these chapters.

It is somewhat unusual among Yizkor books in that the recorded history of the shtetl largely ends a quarter century before the Holocaust, following the dual massacres of 1919. According to multiple survivor testimonies, in August of that year approximately 170 Jewish men were murdered on the bridge that connects Justingrad and Sokolievka by troops under Otaman Zeleny (Terpylo Daniel). A month later, retreating White Russian forces under Anton Deniken entered Justingrad and killed another estimated 200 Jews and burned most of the shtetl. While pogroms were all two common in Ukraine during this time period, this level of violence against such a small Jewish population was unusually severe. From the 1919 massacres and subsequent emigration, there is no remaining narrative history of Jewish life in Justingrad up to the murder of the remaining Jews of the shtetl by the Nazis.

The book is also somewhat unusual in that it incorporates a translated version of an earlier Justingrad Yizkor book, Justingrad-Sokolievka: a Shtetl Destroyed, written largely by the school of the Kibbutz Mashabei Sadeh in 1972. The library holds this original book in its Yizkor collection (library call number DS 135.R93 Y87).

The Library also holds a genealogical book The B’nai Khaim in America, by Joseph Gilman (library call number CS71 .K16 1969), which provides further details of life in Sokolievka and Justingrad, and describes the emigration of the extended family from Ukraine to the United States.

The artwork above and the map to the right are from the Leo Miller book.

Justingrad was completely destroyed by the end of World War II. Since then, a few non-Jewish families have built in the area that was once the shtetl. The cemetery there is long-abandoned. The photos below show the cemetery as it is today, and appear courtesy of Michael Leschenko. 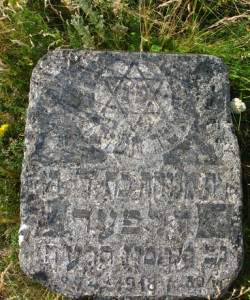 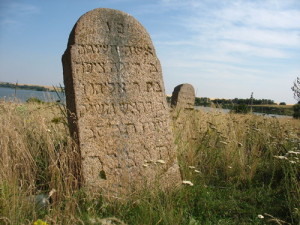