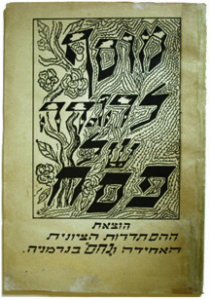 The Yizkor genre includes themes of life before the Holocaust, the Holocaust itself, and the regeneration and renewal that followed. The Haggadah represents a fulcrum between these latter two themes: turning from the horrors of the Holocaust toward a future in Israel and the Diaspora.

Joseph Dov Sheinson was a committed Zionist from Lithuania and had in fact secured permission to emigrate to Palestine before the Soviet invasion prevented his departure. When the German Army came he was interned in the Shavli and Kovno ghettos, spending four years in Nazi concentration camps.

Mikos Adler was an art teacher in Debrecen, Hungary. Sometime in 1944, Adler and his family were loaded onto a transport for Auchwitz, but their train was diverted to Lager 15 in Vienna, and then to Theresienstadt, where they were liberated by the Soviet army on May 8, 1945. Ironically, it was not known that Adler was the creator of the woodcuts in the Haggadah until decades later. It is even uncertain whether Sheinson knew the artist’s identity.

This Haggadah also has a special connection to Portland State University. The Hebrew lead type for the first edition was secured by Judah Nadich, grandfather of Natan Meir, Lorry I. Lokey Assistant Professor of Judaic Studies. Judah Nadich was the U.S. Army’s senior Jewish chaplain while Allied forces were liberating Nazi concentration camps, and was advisor to General Dwight Eisenhower on Jewish affairs in Europe.

“It would be enough” passage from the Survivors’ Haggadah: 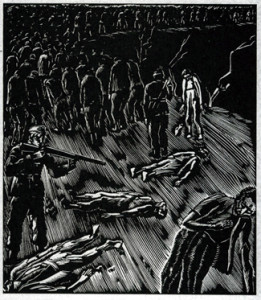 This Haggadah could not have been purchased if not for the generosity of alumnus A. Gordon Hunter. The gift of his estate enables Special Collections to acquire rare and special materials to support the research and learning of the PSU campus; learn more about supporting the Library.

Sources for this page:
Touster, Saul. 2000. A Survivors’ Haggadah. Revised. Jewish Publication Society of America.
Hellman, Peter. 2000. Close to Home – Munich, 1946: Words From a Seder Unlike Any Other. New York Times, April 13.