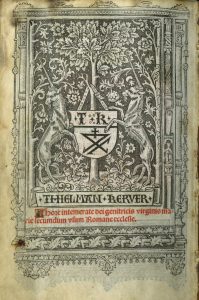 Thielman Kerver came to Paris in the late fifteenth century and operated a bookshop and printing press at the “Sign of the Unicorn.” Kerver’s large collection of engravings distinguished his printed works with rich detail in religious iconography, teeming Gothic illustrations, and delicate Renaissance marginalia. In 2018, with the generous support of the Gordon Hunter Fund, PSU Library Special Collections acquired a Book of Hours printed by Kerver in 1507.

Books of Hours were the most common of all books produced in Europe near the turn of the sixteenth century, both before and after the introduction of the printing press. After the press made mass production possible, the Parisian printing industry, which dominated the European market in the early sixteenth century, produced thousands of Books of Hours for distribution across Europe. The book now held in Special Collections was most likely intended for a Spanish reader, as its liturgical calendar includes  feast days of saints celebrated in Catalonia.

As a visual and written religious text, a work of art created between the late medieval and early Renaissance periods, and an artifact from the dawn of popular printing, this Book of Hours offers students a range of perspectives from which to explore it. In Spring 2018, a group of PSU seniors in Professor Anne McClanan’s Medieval Portland Senior Capstone focused on this Book of Hours with close analyses of its religious symbolism, its textual content and significance, its place in the European book trade and regional use of religious works, and its physical condition. The class was co-taught by Professor Maud Pérez-Simon, a medievalist from Université Sorbonne Nouvelle in Paris, who shared her expertise and guided the students in refining their work.

The students’ essays are now presented online in the PDXScholar digital collection, Kerver Book of Hours, and their research will also be available in the Medieval Portland database, which contains information on artifacts and resources held in collections citywide, including PSU Library Special Collections.

The Kerver Book of Hours is also on display this Fall and Winter terms in the Library’s first floor elevator lobby during the hours that Special Collections is open, Monday through Friday. For more information or to visit Special Collections, please e-mail us: specialcollections@pdx.edu.