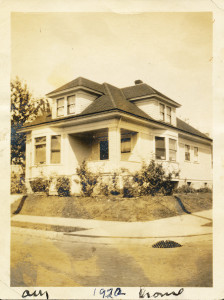 The Northeast Portland family home of Otto and Verdell Burdine Rutherford was recently added to the National Register of Historic Places. According to Oregon Heritage, “the house is believed to be the first historic property in Oregon listed in the National Register primarily for its association with the Civil Rights era.”

Oregon Heritage describes the house on the corner of NE Shaver and 9th in historic Albina as “a modest bungalow that served as a family home and support center for civil rights causes for more than half a century.” They continue:

“It was home to three generations of the Rutherford family, each of which was active in civil rights in Portland. William Rutherford and his brother Henry moved to Portland from Columbia, South Carolina in 1897 to work as barbers in the prestigious Portland Hotel. In 1923 William moved into the 1905 house on Shaver Street in the King neighborhood of Albina. Here William and his wife Lottie raised their four children, including their third son Otto, instilling in them a love of community and respect for education and hard work.

Otto and Verdell moved back into the family home upon their marriage in 1936 and began their life of activism. A high point in their careers occurred in 1953, when Oregon’s Public Accommodations Act, under the sponsorship of then Representative Mark O. Hatfield, was passed. This landmark legislation occurred when Otto Rutherford was president of the Portland Branch of the National Association for the Advancement of Colored People (NAACP) and Verdell was secretary, positions they held for several years. 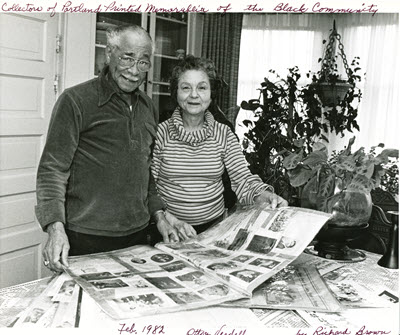 Otto & Verdell Rutherford at their home in 1982. Photo by Richard Brown from the Rutherford Collection at PSU Library.

The Rutherford house, where Otto and Verdell raised their three children, was the location of much organizing for civil rights in the 1940s and 1950s, as well as being the first home of the NAACP Credit Union.

In later years, the Rutherfords worked arduously to document the history of the African American community in Portland. … Otto died in 2000 and Verdell followed shortly thereafter, in 2001. The house is still held by the family.”

View the online exhibit Say We Are Here: Selections from the Verdell A. Burdine and Otto G. Rutherford Family Collection.

Learn more about the Rutherfords and see a larger selection of their family photos, scrapbooks, newspapers clippings, records, and more.