At faculty and staff convocation yesterday, Provost Sona Andrews presented awards to several faculty, including Tom Larsen, whom, as we announced in June, is this year’s recipient of the Kenneth W. and Elsie W. Butler Award for Library Faculty Service. At the ceremony, Tom and other award recipients each spoke for a few minutes. Below we are sharing the text of Tom’s speech.


In 1562 Diego de Landa, in an effort to wipe out native Maya religion, gathered all of the books he could find written in the native hieroglyphic script and burned them. Only three or four such books are known to have survived. This was not the first nor the last time an attempt was made to destroy the cultural heritage of a people by burning their books or destroying their libraries. 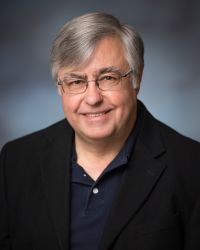 History is riddled with examples of such biblioclasms. After the founding of the Qin Dynasty in China in 261 BC, unapproved books were burned to suppress intellectual discussion and unify political thought. The libraries of Baghdad were destroyed by invading Mongols in 1258, but not before Nasir al-Din al-Tusi rescued some 400,000 manuscripts. The Nazis purged libraries of “offensive” materials and restocked them with ones expressing their racist views. On the other hand, much of the intellectual heritage of Germany was also destroyed by the Allied carpet bombing of German cities. In the 1970s Cambodia was brought to the brink of cultural annihilation by the Khmer Rouge in their attempt to create a new utopian society. Many other examples could be cited up to the present day.

The destruction of libraries is often less dramatic, occurring not via bombs and looting but simply via budget cuts and neglect. And this is nothing new either. The great library at Alexandria is often said to have been destroyed by fire obliterating much of the cultural heritage of the ancient Mediterranean world. This has variously been attributed to Julius Caesar, the Emperor Aurelian, the Coptic Pope Theophilus’s attempt to suppress paganism, and invading Arab troops. However, Luciano Canfora has argued that the library’s demise was actually more gradual than these stories would suggest. By the time Arab troops arrived in 639, the library, through centuries of neglect, was but a shadow of what it was when founded in 283 BC.

Through all of this, librarians have done what they can to preserve our cultural and intellectual heritage from destruction and neglect and to make it accessible. It would be ridiculous of me to claim that Portland State librarians routinely dodge bullets and rush into burning buildings, though I would like to think that at least some of us would if we had to, much in the spirit of Nasir al-din al-Tusi. Nevertheless acquiring, preserving, and making accessible the fruits of our scholarship is basically what we’re all about, though we generally work in more mundane ways. Some work openly, serving the public and teaching library users how to find and use materials. Others, such as myself, work behind the scenes in resource services and technology. Nevertheless, we all have a common purpose in supporting the scholarly output of our students and faculty and resisting the forces that would destroy or diminish the value of our heritage.

I am grateful to my colleagues and the Butler family for recognizing my small contributions to these endeavors.
Congratulations again to Tom Larsen!