In 1970, while serving as an elected member of the Georgia House of Representatives, Bond traveled to Portland and spoke at Portland State on the topic of “Racial Equality in the United States.” His talk included the following quote: 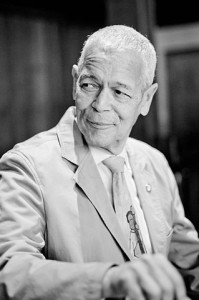 “The processes which elevated the European — hard work, self-help, ethnic identification, political activism, economic separatism, intellectual striving — these can, at best, only minimally improve the condition of the mass of Black people in this country. While American society has always presented the opportunity for some Black people to rise to positions of influence and affluence, and while society presently presents the opportunity for general, if only minimal, improvements to be won through the regular channels, it has not yet shown any indication or willingness to change its three-hundred-year-old history of exploitation and suppression based on race, and an economic system which has always believed that property is more important than people.”

Professor Bond’s lecture at PSU is one of many in the Portland State University Library Oregon Public Speakers Collection. Between 1958 and 1979, Portland State University hosted over two hundred speeches, interviews, panel discussions, and readings by scholars, activists, politicians, authors, artists, and community members. The recordings in this collection reveal an era of vital dialogue and debate supported by the university and its community.

The original recordings of these events were captured on reel-to-reel tapes by Portland State audio-visual technicians. For a time, the tapes were available as a library resource, but after reel-to-reel technology was superseded the collection fell out of use and was not included when the library catalog went online. The tapes spent years in storage until their rediscovery by PSU’s University Archivist. With the generous support of the Institute of Museum and Library Services through the Library Services and Technology Act, new digital transfers of the original reel-to-reel audio recordings are now available to the public in the Oregon Public Speakers Collection.