Illustration from a sketch of the ruins at Tadmor (Palmyra, Syria) by author Emily Beaufort Smythe (1861).

Middle East Studies in the West is informed by centuries of intellectual exchange which includes seminal works by Middle Eastern historians, language and cultural studies developed by European scholars, and popular travel writing, including works by women who toured Egypt, Syria, Lebanon, Palestine, and Turkey in the 19th century. The Library’s exhibit, richly annotated by PSU alumnus and Middle East historian Gary Leiser, presents examples of works that contributed to the development of Middle East Studies in Europe, England, and the United States.


“Orientalism” in Academia and Printing 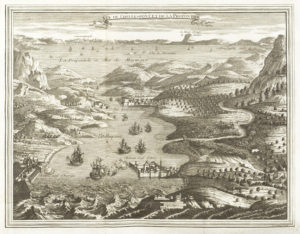 French scholars coined the term “Orientalism” in the 18th century to describe the European scholarly study of the geographical region in which Arabic, Turkish, and Persian were spoken. For Europeans, this region began at the Eastern Mediterranean and, by extension, where the Christian and Islamic worlds met. 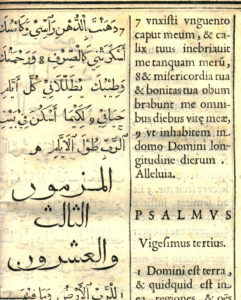 Detail from the Psalms printed in Arabic and Latin by Francois Savary de Breves (1614).

Initially, Orientalism focused on translation, acquisition of scientific knowledge, and support of Christian missionary activities, but new approaches to texts and history broadened the field after the Renaissance. The first books were printed in Arabic in the 16th century, and many Western scholars sought to consult (and publish) important Arabic works in the original.  European universities promoted Middle Eastern studies by establishing chairs of Arabic.

As European commercial and diplomatic relations with the Ottoman Empire and the Middle East in general expanded during the 18th and 19th centuries, study of the region developed as well and became increasingly secular, incorporating natural and cultural studies drawn from field research in addition to works on languages and religion. The exhibit features a printing of the first book set in Arabic type at Oxford (by the university’s first chair of Arabic), an edition of the Psalms in Arabic and Latin printed in France in 1614, and several examples of important works in printed Arabic written by Middle Eastern historians from the medieval era to the 18th century. 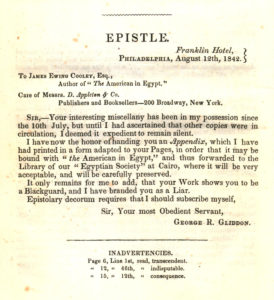 In the 19th century, travel literature from the East gained popularity with the Western public. The new field of Egyptology also inspired tourism and spurred book sales. Popular Egyptologists in the exhibit include women like Amelia Edwards, whose journey up the Nile in 1873-4 inspired her life’s work of professional study and preservation of Egyptian antiquities, and Americans James Cooley and George R. Gliddon, who came to blows in New York City over Gliddon’s scathing refutation of Cooley’s poor scholarship and mockery of the American consulate in Egypt in 1842.

This essay is drawn in part from a sketch of the history of Middle East studies by historians Gary Leiser and John Mandaville. Portland State University Library Special Collections thanks the Tarbell Family Foundation for supporting the ongoing development of the Middle East Studies collection.