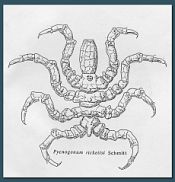 The exhibit featured books and documents from the archive of Dr. Joel Walker Hedgpeth (1911-2006).

Dr. Hedgpeth was a key figure in marine biology and oceanography, first along the inter-tidal coast of California and Oregon, the gulf coast of Texas, and then across the world. He was a skilled illustrator and editor, and authored many publications. With a distinctive voice, he lectured widely and influenced many students of marine and estuarine biology.

Hedgpeth’s primary field was taxonomy, and he specialized in Pycnogonida, a group of marine arthropods known as “sea spiders.” However, his life and work included many friendships and relationships with key people in biology and other fields, including John Steinbeck, Ed Ricketts, Aldo Leopold, C. S. Lewis and Joseph Campbell. He was a supporter of women in science including Olga Hartman, Libbie Henrietta Hyman and S. M. Manton.