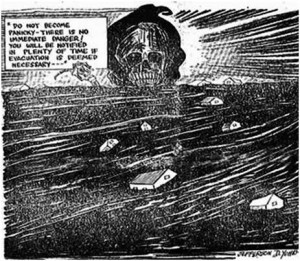 Take a journey along the Columbia from The Dalles to Puget Island. It is late spring 1948 and it has been unusually wet this year, even for Oregon, but now it’s warming up and today looks like it’s going to be especially nice. Certainly several other communities along the river have flooded, but the Housing Authority has just assured Vanport city that they are on top of the situation. The dikes are safe. The situation is under control, so relax and enjoy Memorial Day weekend.

With the recent (re)discovery of over 100 Columbia River flood photos from around western Oregon, Portland State Library’s University Archives presented a new exhibit on the flood, the city it destroyed, and the university that grew out of it. The exhibit highlighted several rarely seen photographs, documents, and ephemera.