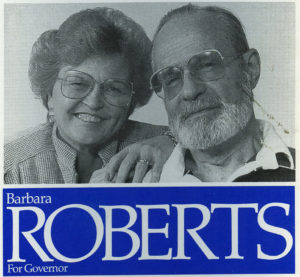 Campaigning in 1990 with her husband, Oregon Senator Frank Roberts.

Two and a half decades before Hillary Clinton won the most-watched Presidential debate in United States history, Barbara Roberts led 1990’s televised debates for Oregon Governor with her ethic of “hard work and no double talk.” Today you can get to know Oregon’s first woman governor, the causes she fought for, and the political and personal challenges she faced through some of her many dynamic public appearances in the Barbara Roberts Video Gallery. 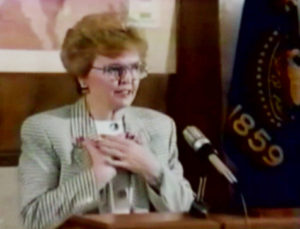 Roberts speaking to the press in Salem in 1991.

Centered on her term as governor in the early 1990s, the gallery contains streaming video of original recordings from 1989-2007. It includes debates from Roberts’ candidacy, official state speeches such as her inaugural address and the State of the State, press conferences, keynote speeches to civic and political organizations, and, most extraordinarily, live television appearances in which she spoke directly with constituents and listened to their ideas and concerns. In her informative, engaging dialogues and speeches, Roberts stands out among politicians as a leader with a strong sense of personal responsibility and trust in the citizens she served.

Roberts got involved in politics in the early 1970s as an activist parent, lobbying for her autistic son’s right to public education. The success of her effort to change state law convinced her that good leadership relies on citizen participation and that every person has the power to make a difference. Prior to her candidacy for governor, she served as a county commissioner, Oregon State Representative, and was elected to two terms as Oregon Secretary of State.

As governor, she advocated for human rights and civil rights, environmental management, and redeveloping Oregon’s economy as the state’s population grew and its major industry, lumber, was in transition. She also stood for equal marriage and family rights for gays and lesbians and for women’s access to birth control and abortion. During and after her term as governor, she fought restrictive legislation on these issues and worked with community advocates to secure and protect these rights. She spoke openly with all Oregonians about her commitment to these and other contested issues. “You may not agree with her stand,” a presentation on her political career summarized, “but you will have no doubt what that stand is.” 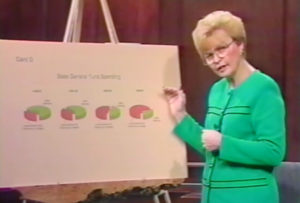 Roberts presenting on the state budget in “A Conversation with Oregon” in November 1991. 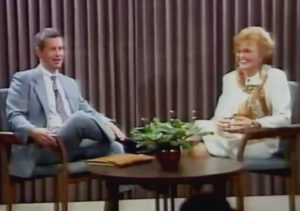 Roberts invited state employees to “Ask the Governor” on live television in March 1991.

Throughout an often painful process of restructuring and straitening the state budget, Roberts sought to communicate her plans and goals to all Oregonians and to include citizens’ contributions to the discussion. In an extraordinary effort to inform the public about the ways in which their tax dollars were spent and to hear which government services were most valued by Oregonians, she appeared on a live television call-in program, “A Conversation with Oregon,” to have direct, unscripted dialogue with voters. She also hosted similar teleconferences with state employees whose jobs were affected by profound budget cuts demanded by revenue shortfalls.

Roberts chose not to run for a second term in 1994, and spoke honestly in televised interviews about balancing her personal and political responsibilities. She continues to be an active public speaker, recognizing the importance of mutual communication, respect, and support between community members, political organizations, and government.

The videos in this collection are part of the Barbara Roberts Papers held by PSU Library Special Collections. While Roberts’ official papers reside with the State of Oregon Archives, her collection at Portland State illuminates her personal approach to the landmark issues and events of her political life, and this selection of her public speeches provides a visual introduction to the character and accomplishments of Oregon’s 34th governor.